I was having a conversation with my mother who is visiting from Montana about how worship attendance is declining pretty much across the church and how I have been thinking about what that might mean for the church. We talked about my current call and how I was seeing the same thing happening here. I talked about how I have been thinking about what it might mean to a Christian where attending worship is not as important as it once was. In this conversation I suggested that worship attendance is probably not “where the world begins and ends.” That is where her 82 years and perhaps the reality of having buried 2 husbands spoke in a clear voice. Actually, she said it sort of is “where the world begins and ends.” 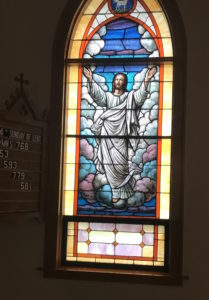 It is true enough. This past Sunday, we baptized our youngest member and not long ago we buried a long time member Yes, for those of us who connect ourselves to places like this, it is where the world begins and ends… but what about the space in between?

The family I grew up in attended worship every Sunday, as did the family Kathy and I raised. While I would like to say that on account of that habit we all still attend worship regularly, it would not be true. While I would eventually go on to become a pastor, for my sister, church attendance would be driven more by the influence of her children than it would be by the imprint of her early childhood experience of regular attendance. Our own children look to be following the same path. None of them attend worship regularly. I think they all would say that Christianity is important to them but it is just that worship is not the central feature in their lives that it once was.

Perhaps my family is a projection of what is happening across the church and across Christian culture. Worship attendance is decreasing in priority. If we are honest, it has been for a long time. I find myself wondering what that might mean for faith. It seems that Christianity at least in the way increasing numbers of folks, participate in it, is becoming unsupported. For increasing numbers of folks things like worship attendance, Bible study, and acts of service have been replaced by a vague sense of “being a Christian.” What used to be a matter of community is increasingly becoming a matter of personal religious conviction. Our culture has facilitated this reality.

I grew up in the era of televangelists, where a televised preacher could allow us to experience worship from the comfort and safety of the sofa in our own living rooms. While this experience was roundly criticized by the established church, it flourished. With the advent of electronic media, you can now find an almost infinite collection of sermons on YouTube that are better than anything I might preach. Music that fits your preference and is better than anything we can produce here is just a search on Spotify away and any theological question you might have can be answered quickly with a simple Google search. But all of it is personal, delivered to your mobile phone or personal computer whenever and wherever you would like.

What seems to have become optional though is what I thought was key to Christianity. Faith is meant to be lived out in community. I am not sure what that means in a world that is increasingly busy. I understand. People are busier than ever. Even if there isn’t a direct conflict on Sunday mornings, for many it is one of few times when they might be able to find a little quiet family time to spend together.

The church is about baptisms and funerals, true enough, as my mother reminded me- “where the world begins and ends.” Throw in confirmations and weddings. Still, what should the space in between look like? I used to have a good idea about that. Lately I am finding myself revisiting even the most basic of these assumptions.